The Sustainable Technologies Evaluation Program (STEP) is a collaborative non-profit research initiative within the Toronto and Region Conservation Authority (TRCA). Among other priorities, STEP leverages partnerships with municipalities, provincial and federal government bodies, utilities, non-profits, academic institutions, and private companies, to pilot and evaluate emerging low-carbon technologies with the aim of providing real-world data that informs effective technological responses to climate change. STEP team members are scientific monitoring and M & V experts, particularly as it pertains to renewable energy, HVAC and smart-grid. Research projects are conducted either in STEP’s own state-of-the-art Living Labs or off-site in real-world buildings.

Heat pumps achieve heating efficiencies beyond conventional limitations because they extract renewable heat energy from the air, ground or elsewhere. Natural gas heat pumps (GHPs) are of interest because they utilize a low-cost fuel. GHPs have been applied in Europe and Japan, but have not made significant inroads in Canada. This study analyzed the operation of a GHP installed at the Archetype Sustainable House (ASH) Lab in Vaughan, Ontario, during 2017/2018. The aim of the study was to characterize the GHP’s performance for cold-climate conditions such that potential energy, cost, and carbon reductions could be estimated for different Canadian applications.

The GAHP-AR from Robur was evaluated. It is an “air-to-water” gas absorption heat pump that heats as well as cools. Nominal heating capacity and efficiency are 35.3 kW and 126% (HHV), respectively, and it supplies fluids up to 60 °C. A heating-only version (GAHP-A) is also available. The unit is single-packaged, installed outdoors on a pad or rooftop, and connected to a building via hydronics. It is well-sized for large homes, multi-unit residential and industrial-commercial-institutional (ICI) buildings.

The ASH Lab consists of two semi-detached LEED platinum homes. It is uniquely equipped with a state-of-the-art data acquisition system. The Lab was used as a load during testing.

Heating and cooling performance were measured for different conditions (heating efficiency is in Figure 1). An hourly bin analysis then considered climate and building data to estimate savings versus an efficient boiler for different applications. 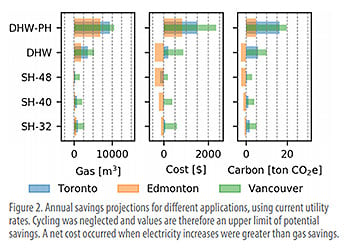 Some applications have a net annual cost rather than savings due to colder outdoor temperatures and/or higher inlet fluid temperatures (see results for Edmonton in Figure 2).

GHPs can result in substantial carbon reductions and could benefit significantly from carbon pricing. Depending on the value of carbon and the application, there is potential for several hundred dollars in additional annual net savings.

The GHP operated without issue and no special expertise was required for installation, commissioning or operation.

Long cycles are key. The GHP takes ~8 min to reach optimal efficiency after turning on. For the greatest savings, system design/control should promote cycles that are much longer.

A 10-year payback is feasible for DHW pre-heat applications in Toronto. The Canadian GHP market is not yet mature and capital costs are currently ~3x greater than comparable high-efficiency boilers. However, high annual cost savings for certain applications makes a 10-year payback period possible under ideal conditions.

This study identified suitable applications for the GHP and estimated potential savings. However, additional modelling work is needed to fully evaluate the benefits for specific buildings. Gas absorption heat pumps are a very promising technology. While it is not a cost-effective option in every instance, DHW applications especially have potential for notable operational cost savings and substantial carbon reductions.

Back to the index

The Robur Gas Absorption Heat Pumps (GAHP) combine the advantages of the condensing boilers and the...

The major part of the energy of the air is nothing else...

Your Heating System can give you Cooling for FREE.