Innovative choice of the Municipality of Milan: 24% savings, reduction of polluting emissions and high efficiency all year round

Redevelop the plant assets, keep energy consumption monitored, increase energy efficiency and improve environmental comfort. These are the guidelines that prompted the Municipal Administration of Milan to intervene decisively in the plant structure of the complex in via Amari, home to the Technical Office and the Maintenance Sector.

A project that has changed the structure of the building's thermo-hydraulic systems, initially intended for heating only.

The client's needs were:

The renewal of primary air is guaranteed by Air Handling Units and aeraulic networks served by the central heating system.

A field of panels has also been added solar thermal for the production of domestic hot water. 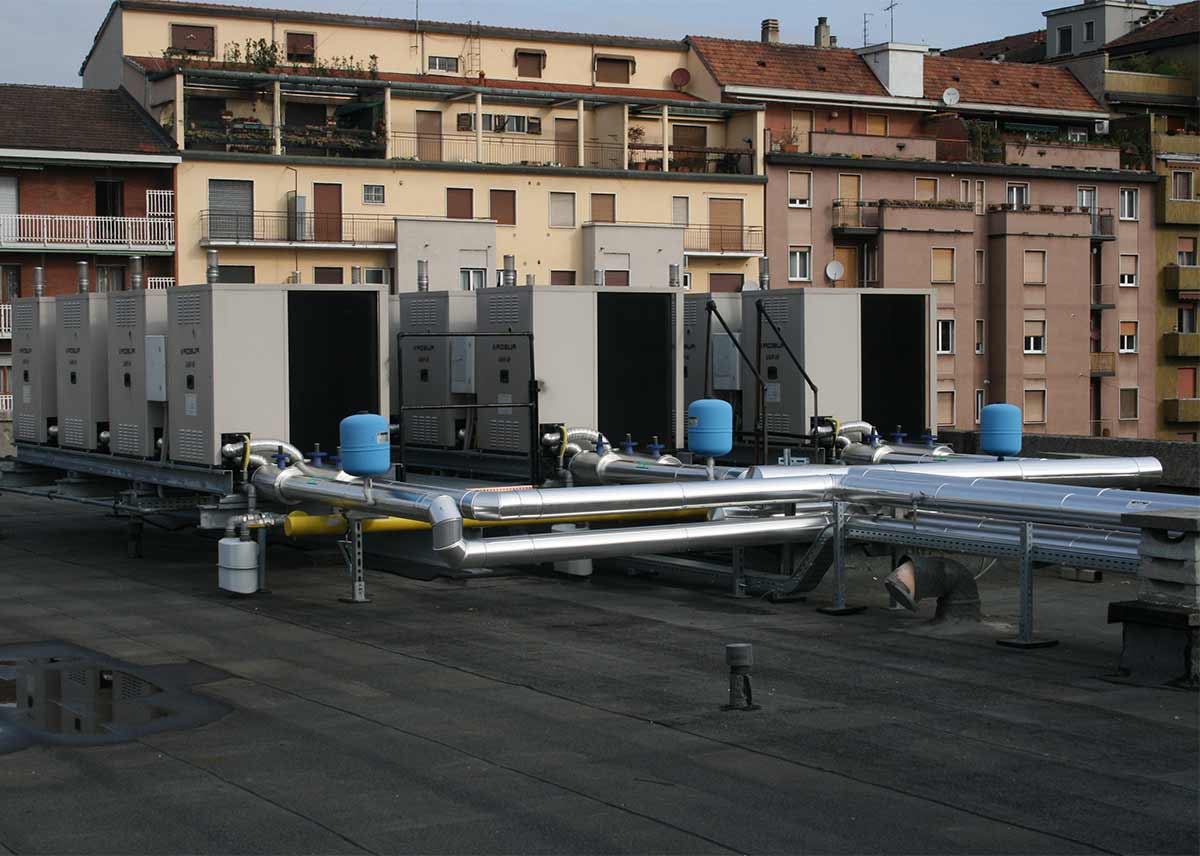 The twelve Robur GAHP-AR reversible absorption heat pumps running on natural gas and renewable aerothermal energy allow the recovery of thermal energy from the outside air, even at outside operating temperatures in the winter period in Milan often close to 0 ° C / -5 ° C.

Furthermore, they are able to obtain average efficiencies in the heating phase of 140%, about 35 percentage points more than the best condensing boilers on the market. But not only. The absorption technology uses gas as primary energy and thus, in the face of a cooling capacity of over 200 kW, it was possible to limit the electrical commitment to only 11 kW against the 75 kW that would have been needed in the case of group installation. electric cooler. In this way, expensive electrical plant works and an electrical substation were avoided. The particular exposure of the building in via Amari and the internal latent loads also brought with it another need: the need, at certain times of the year, to heat some rooms and to condition others at the same time.

The high modularity of the Robur absorption system has made it possible to divide the installed power into mid-seasons so as to produce water at the same time chilled at 7 ° C for the conditioning phase and hot water at 50 ° C for the heating phase. The entire heating system was positioned on the roof of the building, avoiding costly adaptation of rooms used as a thermal power station.

Robur air-cooled heat pumps are in fact certified and tested for outdoor installation and for operation down to -20 ° C.

About three years after the completion of the works, the set objectives were fully achieved.

The adoption of this plant, compared to a traditional solution, avoids the emission of 17 tons of carbon dioxide and 8 TOE (tons of oil equivalent) every year.

An example of great attention to ecology that has found fertile ground in the Municipality of Milan.

The Via Amari complex is thus the demonstration that even in public buildings it is possible to combine energy efficiency and economy of investment costs, with particular attention to respect for the environment.

Energy efficiency improvement of public building from the sixteenth century

Retrofit with radiators in the harsh climate of Flanders

Innovative choice of the Municipality of Milan: 24% savings, reduction of polluting emissions and high efficiency all year round